Thanks to all our volunteers, coaches and managers who made it all happen.

A great achievement for a young team in a senior tournament.

This was the first Maadi Cup team the school has entered for several years, with a crew of five students entered in the Novice U18 events.

Our Novice Coxed Four placed 6th out of 8 in their heat. The same team also entered in the Novice Quad Sculls had a fantastic row with a great time (20 seconds faster).  However sadly we were in the fastest heat of the day and were eliminated.  In any other heat we would have placed 4th and gone through to the semi-finals.

This was our coxswain Gabrielle Cabauatan’s first rowing event, and she should be very proud of her achievement.  Gabrielle did a great job of coxing in an elite event.

We entered two crews in the double sculls, Erin and Madison and Sophia and Peyton. Erin and Maddison are new to rowing as a pair, so went for the experience and placed 7th in their heat. Sophia and Payton had a great regatta placing 4th in their heat, and followed that with a 5th in the semi finals . This took them through to the C final where they finished 6th overall.

This was an amazing achievement for our school to compete at the highest level against some large schools with extensive rowing programmes.

On 22 March we were lucky enough to attend the NZ Secondary School Nationals for waka ama in Rotorua where we took a team of six to the week-long paddling event .

For our first day of racing we teamed up with some paddlers from St Pat's Silverstream and made an U19 mixed team.  The team placed 3rd which took us to the finals. We had one of the fastest times but came 9th in finals with a 4 second difference between us and first place.

We then had two different races throughout the week and progressed to finals for one and missed out on a place in finals for the other by a split second. Our aim for this year's nationals was to be able to take a team of girls and let them enjoy their time of paddling at a competitive level, Each day our girls paddled better than the day before and it was clearly seen on the water that their time and effort paid off.

This competition wouldn't have gone ahead without the endless support and help from our girls and parents. It was a long process to finally get a waka ama team, but we did it and it is definitely a lesson that we will be able to look back at in the future.  I'm super proud of the team and all they did to make this happen. 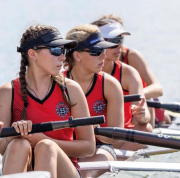